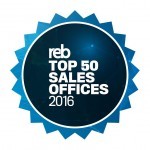 Ray White Robina has been announced as the top office in Queensland at the REB Top 50 offices announcement on Thursday night, coming in at number 7 across the nation.

The REB Top 50 office awards single out the top performing real estate offices in the country based on sales volume, number of properties sold, average price, and also the efficiency and the ratio of sales staff. The data is then verified by onthehouse.com.au to produce the top 50 offices in Australia.

Ray White Robina Principal Scott Burgess was thrilled with the result. “We were happy to beat last year’s result which was 47, but coming in at number 7 was very exciting, the calibre of offices on this list is
already impressive, and it’s exciting to be in such great company,” said Scott.

Ray White Robina has had an impressive 12 months, also taking out the No 1 Office Internationally within the entire Ray White Group for Customer Satisfaction at last years’ group wide conference and award night.

Back to all news
Up to Date